The St. Louis based protest group Expect Us planned to march to Mayor Lyda Krewson's House after she read names and addresses of activists who wanted to defund the St. Louis police department on a Facebook Live. A marched started not far from her house, but the group encountered a couple waving guns at them in a moment that immediately went viral.

The couple, Mark and Patricia McCloskey who are personal injury lawyers, found viral fame and were invited to speak at the 2020 Republican National Convention. After the confrontation protesters occupied the street in front of the mayor's house into the night. Five days later, demonstrators returned to the neighborhood where streets were closed with barricades and private security was guarding the McCloskey's home. 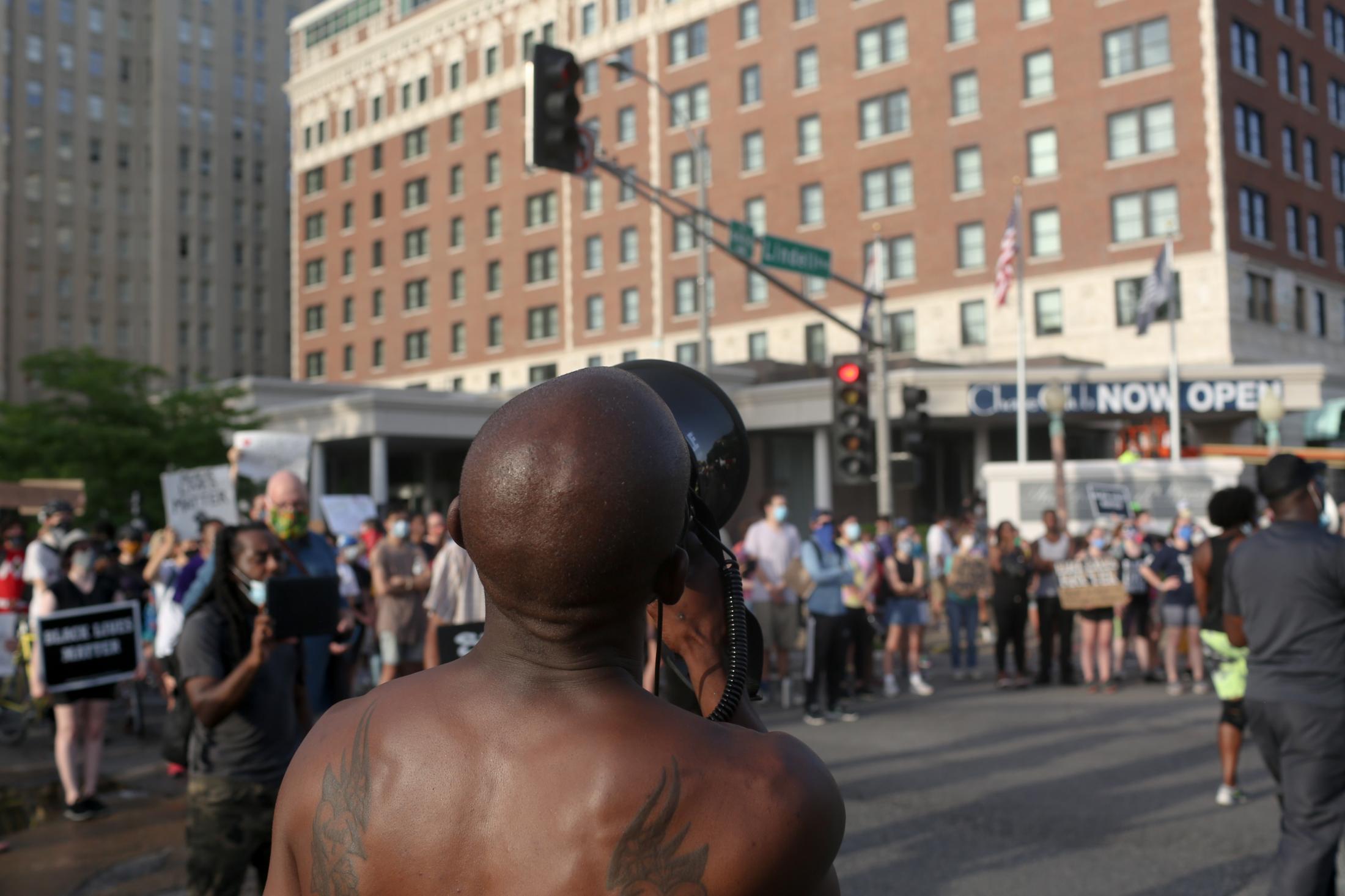 2 / 12
A protesters chants into a mega phone in front of the Ritz-Carlton Hotel on June 28, 2020 in St. Louis, Missouri. Two protest marches merged on Kingshighway in the Central West End neighborhood of St. Louis and planned on marching to the St. Louis mayor's house. 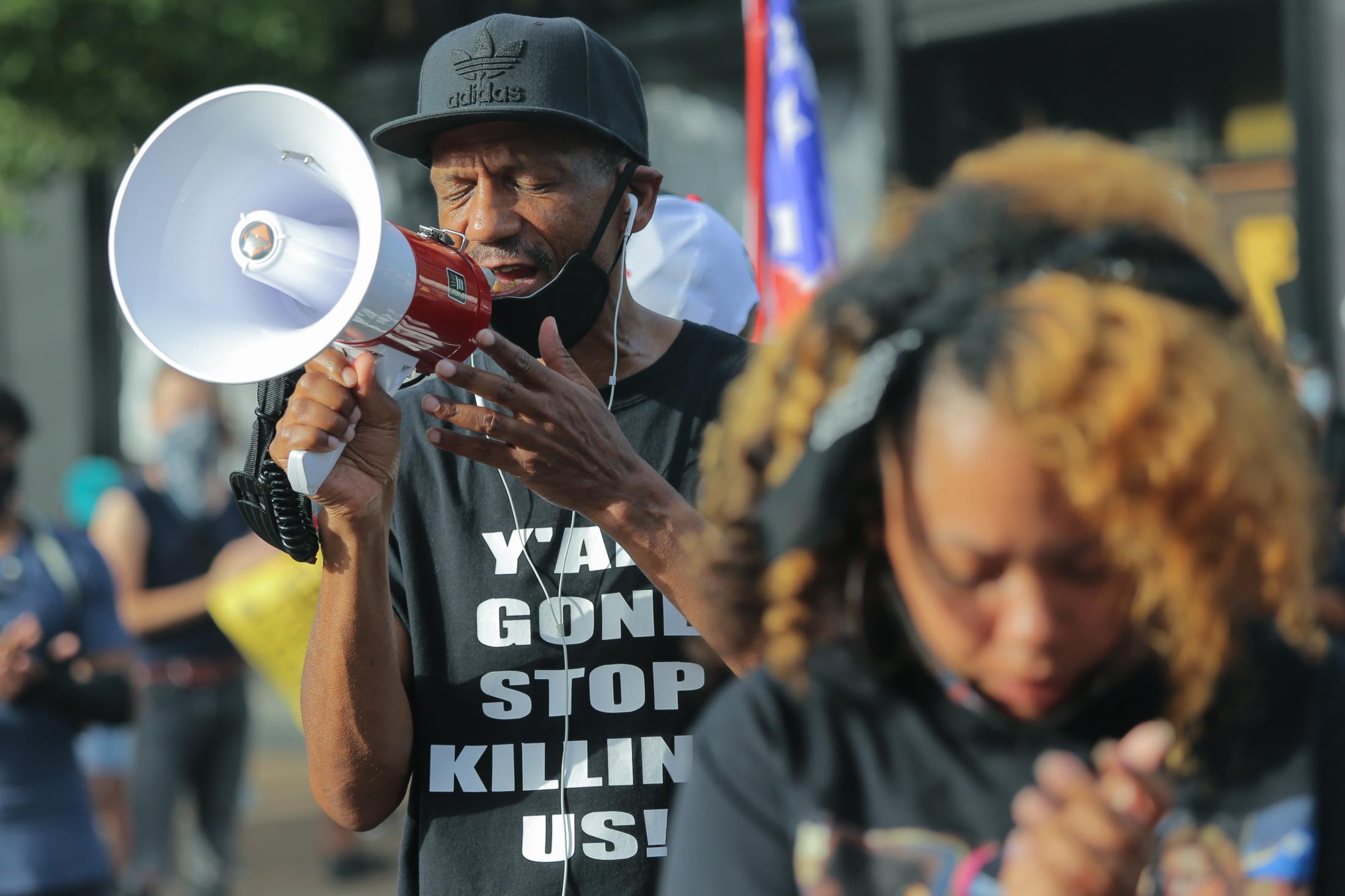 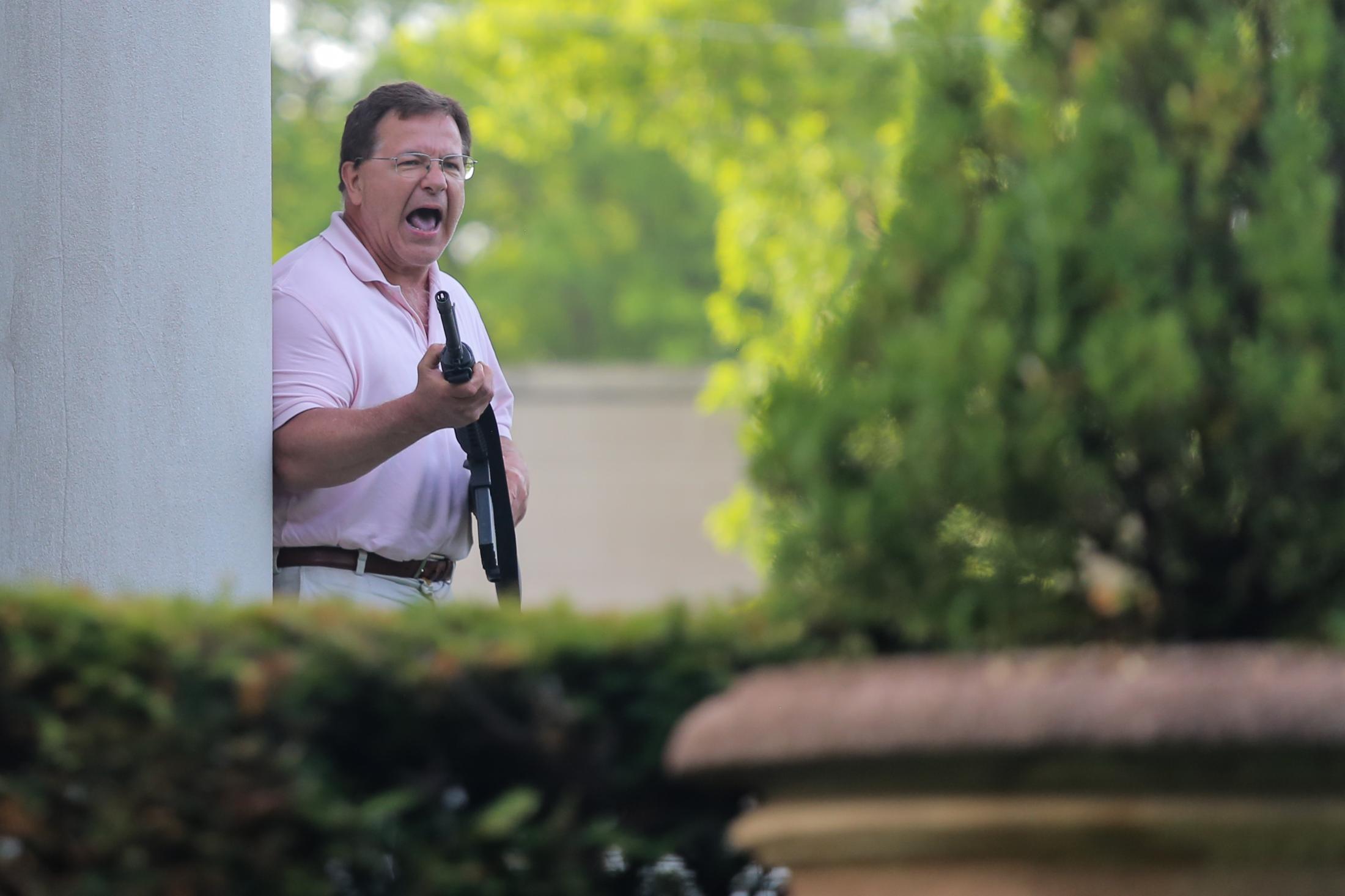 4 / 12
Mark McCloskey waves his AR-15 rifle over protesters who marched onto Portland Place in front of the house where he and his wife Patricia live on June 28, 2020, in St. Louis. A group of around 150 protesters broke away from a larger group and walked through a gate where they were confronted by the armed couple. 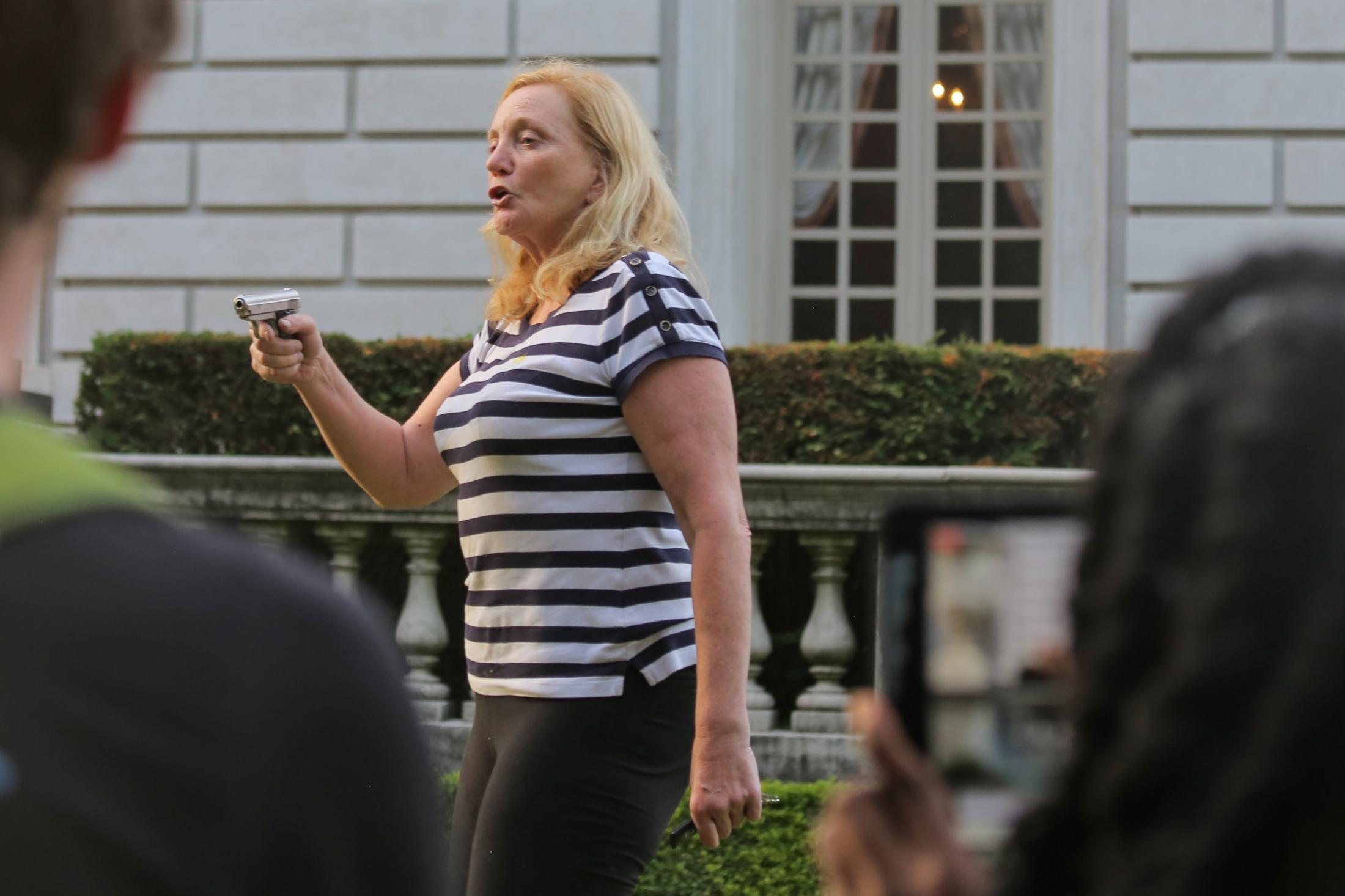 5 / 12
Patricia McCloskey aims a handgunl with her finger on the trigger while walking in front of protesters who marched past her home in St. Louis on June 28, 2020. After the incident Patricia and Mark McCloskey accepted an invitation to speak at the Republican National Convention. 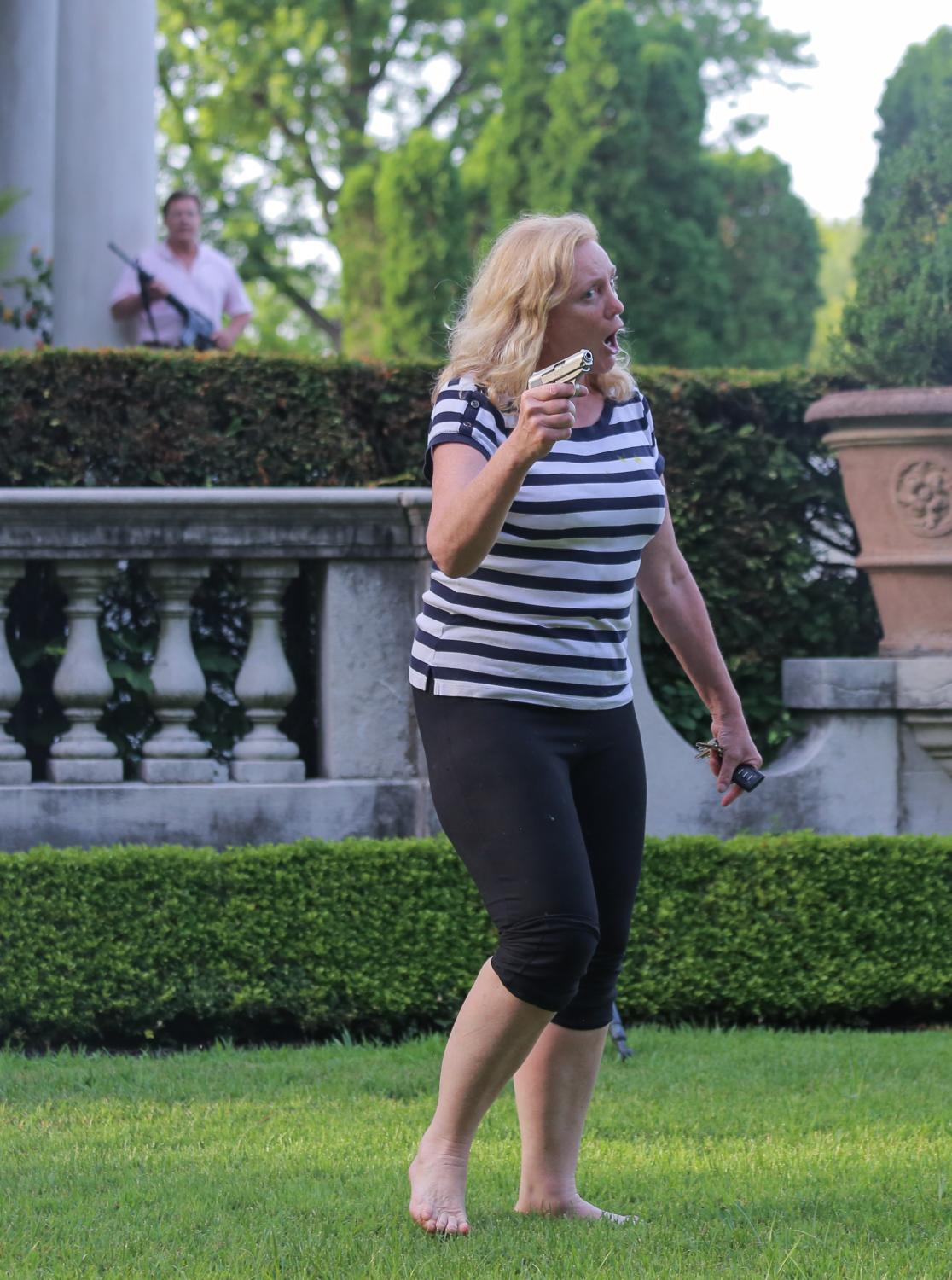 6 / 12
Patricia McCloskey aims a pistol with her finger on the trigger at protesters who marched onto Portland Place in St. Louis on June 28, 2020. The McCloskeys were charged with felony gun charges after the incident. 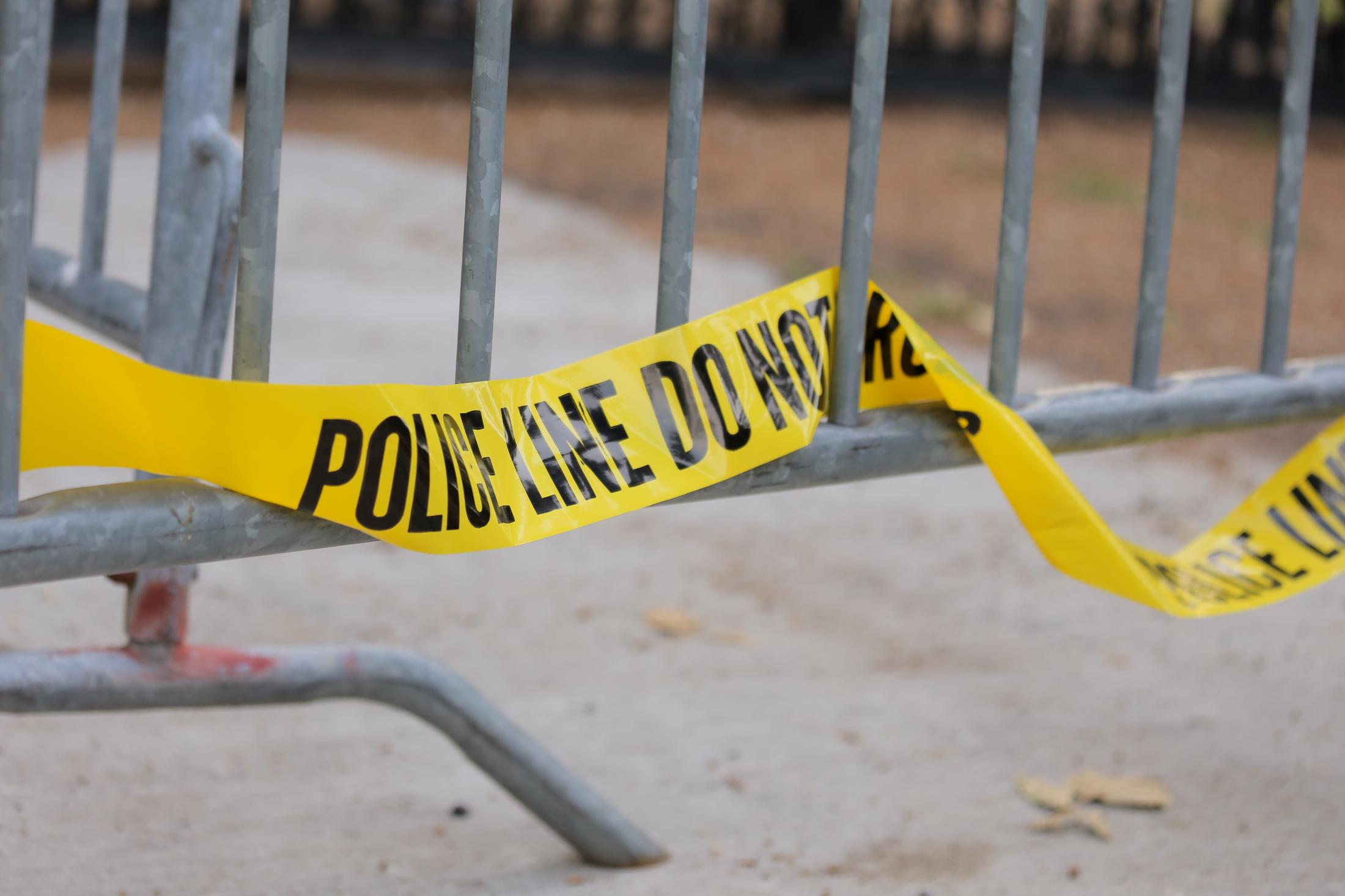 7 / 12
Metal barricades and police tape are put up at the intersection of Portland Place and Kingshighway on July 3, 2020, days after the McCloskeys pointed guns at protesters on their street in the Central West End neighborhood of St. Louis. 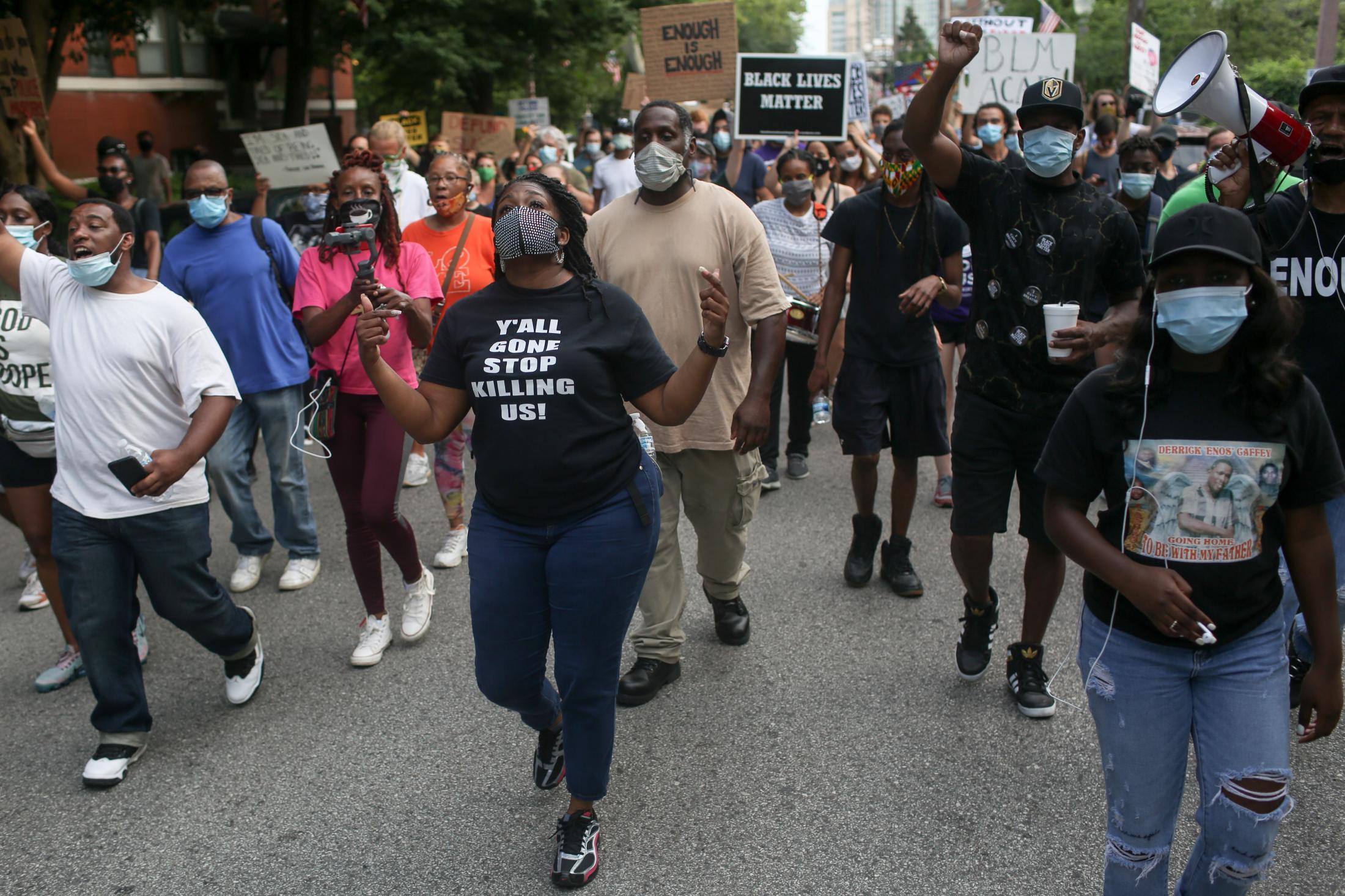 8 / 12
Cori Bush, center, leads a march down Euclid Avenue towards St. Louis Mayor Lyda Krewson's house on July 3, 2020, in the Central West End neighborhood. Bush is running to be elected to the U.S. House to represent Missouri's 1st Congressional District and is an organizer with the activist group Expect Us. 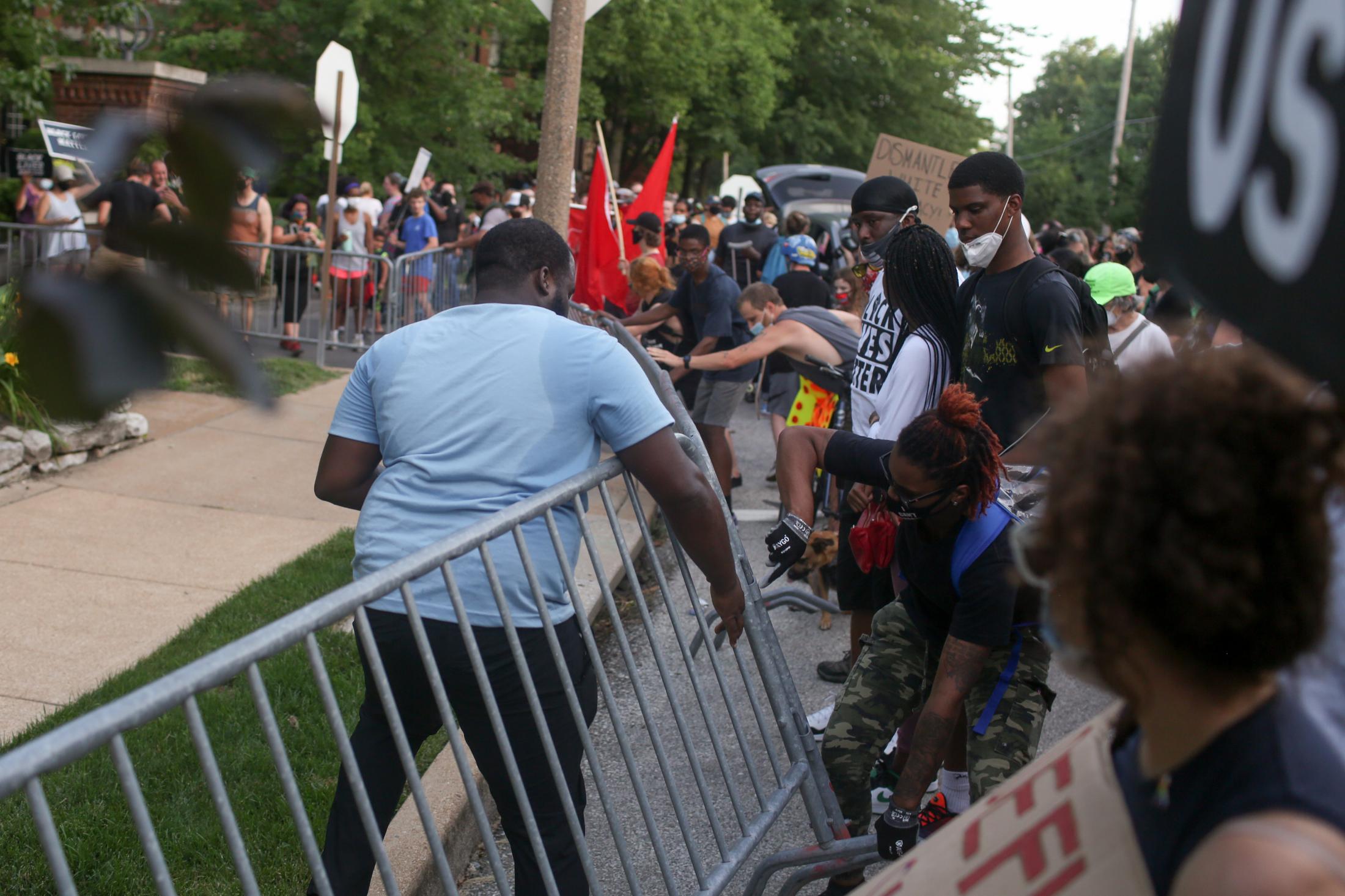 9 / 12
Protesters topple a fence near St. Louis Mayor Lyda Krewson's house on June 28, 2020, after a march ended in the Central West End neighborhood. Activists marched to her house in response to her reading the names and addresses of activists who wanted to defund the St. Louis police department on a Facebook Live video. 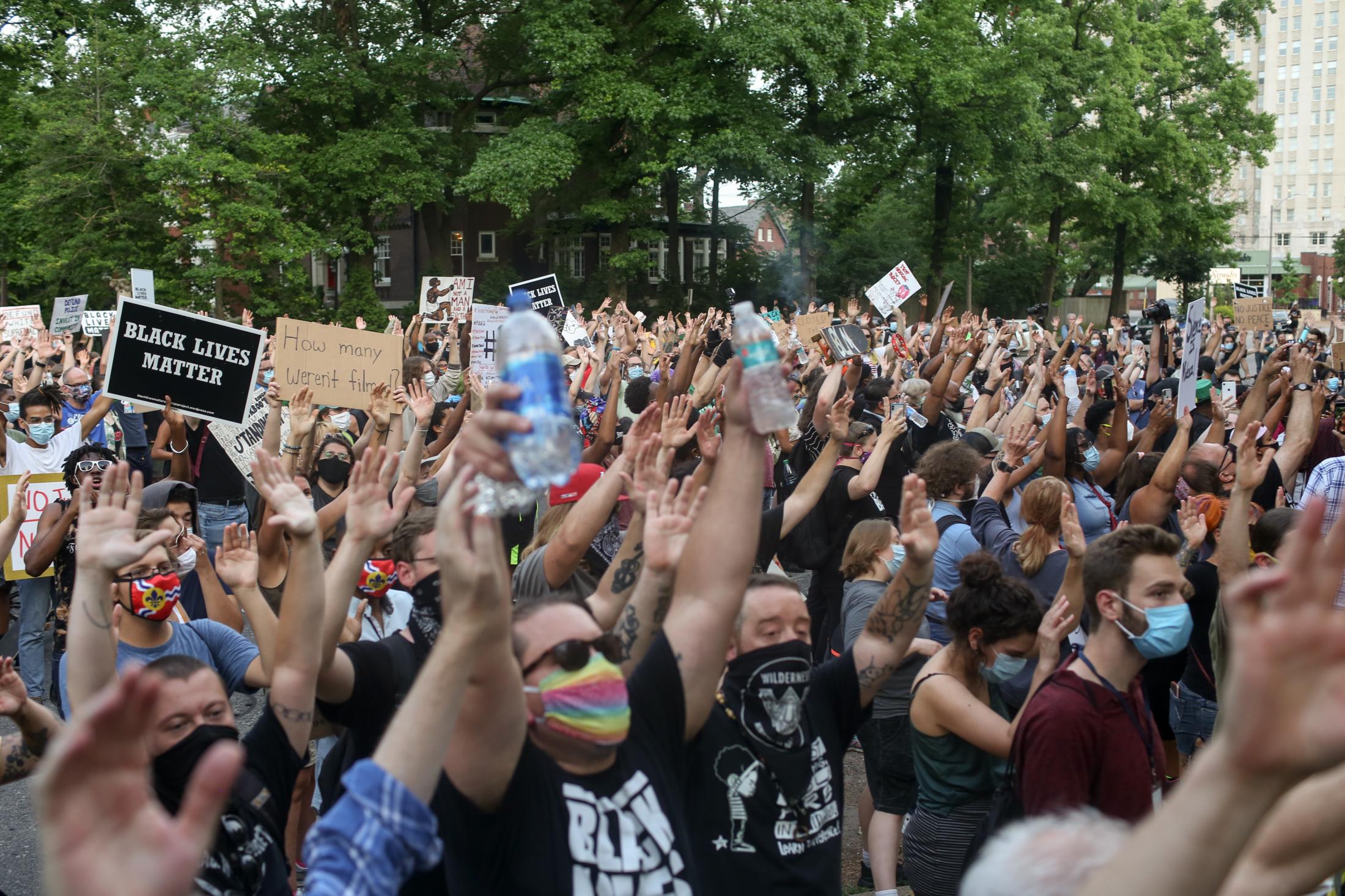 10 / 12
Hundreds of protesters stop at the intersection of Portland Place and Kingshighway in St. Louis on July 3, 2020. Protesters returned to Portland Place after the McCloskeys pointed guns at protesters as they passed their house on the way to protest at St. Louis Mayor Lyda Krewson's house on June 28, 2020. 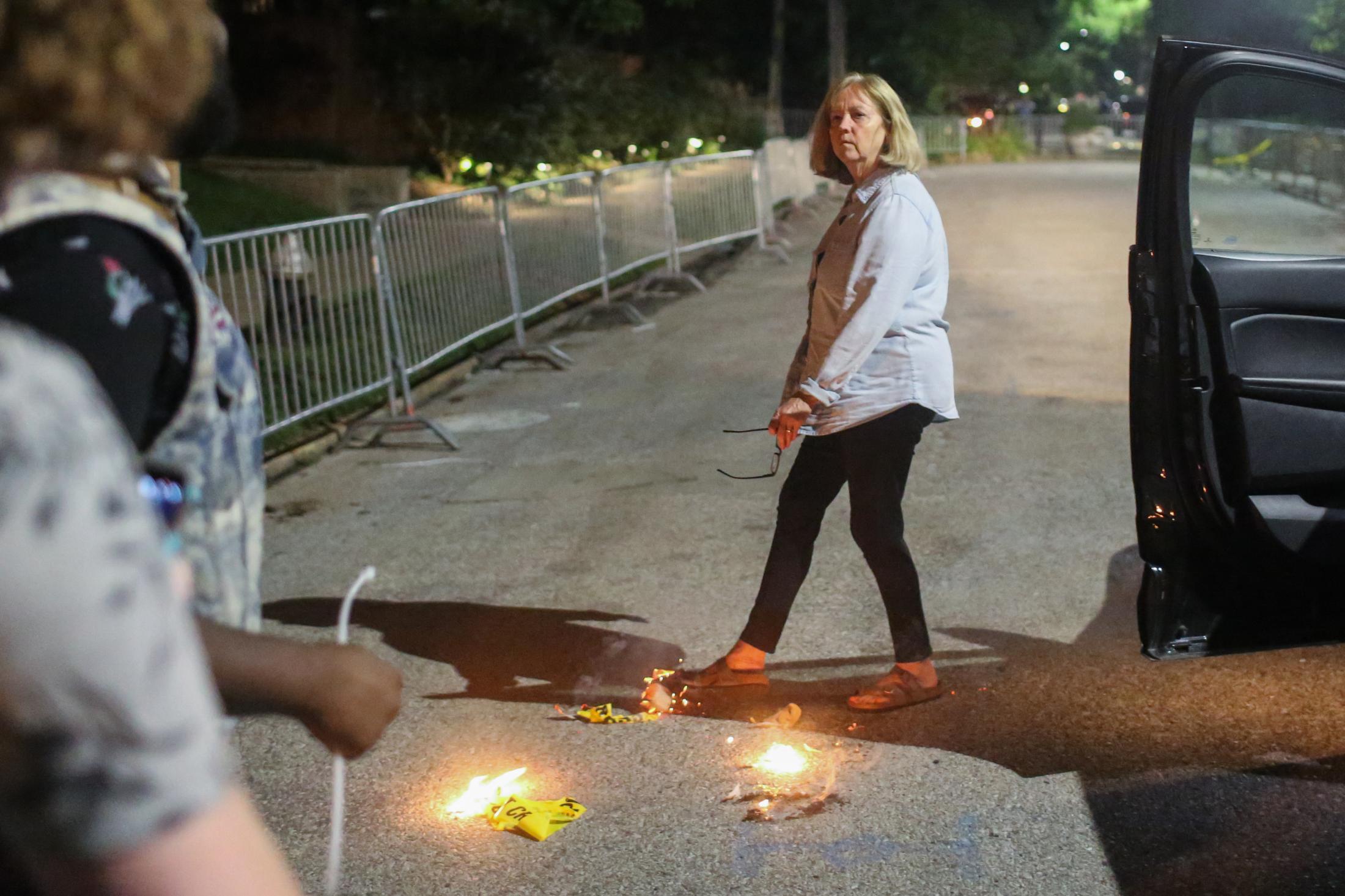 11 / 12
St. Louis Mayor Lyda Krewson stomps out a small fire that was set in the middle of the street in front of her house on July 3, 2020 in the Central West End neighborhood. 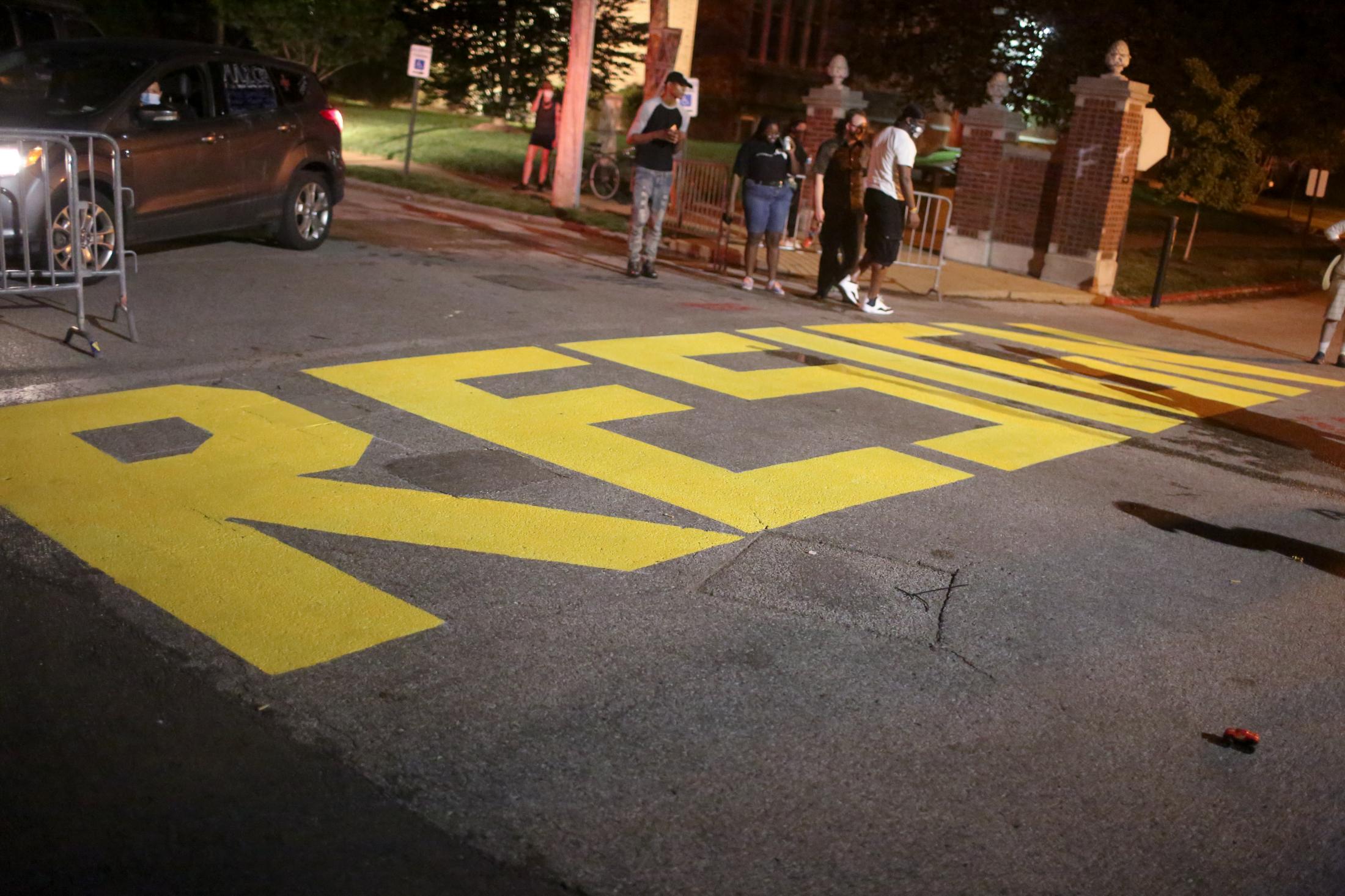